"Come Fly With Me" - The Sammy Cahn Songbook!

"Come Fly With Me" - The Sammy Cahn Songbook! - The show is coming soon!!!

Kissing Bandit Productions presents an evening of the most recorded lyricists of the 20th century...Sammy Cahn!

The show is can be performed by a full orchestra, three piece trio, or fully orchestrated prerecorded tracks or a combination of all of the above...your choice!

Check out our websites:

Posted by Perry Lambert at 4:12 PM No comments:

Perry's tour-de-force performance of a macabre episode of Alfred Hitchcock presents...the remake of "My Fair Lady" with some absurd Hollywood stars coming out for the casting call!

Posted by Perry Lambert at 1:11 AM No comments: 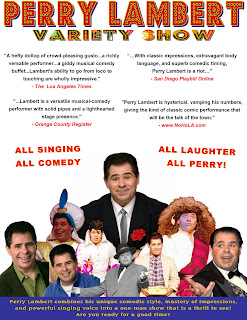 “Perry Lambert is hysterical, vamping his numbers, giving the kind of classic comic performance that will be the talk of the town”
― www.NoHoLA.com
Posted by Perry Lambert at 12:37 AM No comments:

Perry Lambert headlines this fast paced song and laugh fest featuring Hollywood's most memorable motion pictures and the stars who made them!

"Every moment bursts with the brilliance that is Perry Lambert." - Los Angeles News Group

"One of the best triple threat singer/comedians you'll ever see.." -- State of the Arts -- LA Talk Radio

Posted by Perry Lambert at 12:34 AM No comments: 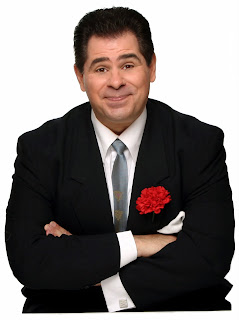 Recently nominated as the “Best Male Cabaret Artist” in Los Angeles by BROADWAY WORLD, Perry Lambert’s distinguished career has earned him international acclaim for musical comedy, dramatic acting and witty characterizations in theatre, film, television and recordings. He has held major roles in over 50 theatrical productions, including FIVE COURSE LOVE, CITY OF ANGELS, PURLIE, GUYS AND DOLLS, THE FANTASTIKS, THE DIARY OF ANNE FRANK, A FUNNY THING HAPPENED ON THE WAY TO THE FORUM, SWEET CHARITY, KISS ME KATE, THE MUSIC MAN and the original production of FORBIDDEN HOLLYWOOD. In his lengthy career, Mr. Lambert has shared the stage with such notables as Debbie Reynolds, Bob Hope, Rosemary Clooney, Charles Nelson Riley, Stephanie Powers, Hal Linden, Liza Minnelli, Peggy Lee, Natalie Cole, Mimi Hines, Chita Rivera, Tony Bennett and many other celebrities.

As an accomplished Singer, Actor, Comedian, and Impressionist, Mr. Lambert has featured his multiple talents in solo performances at The Improv, Bally's, Caesar's Palace and Performing Arts Centers around the United States. In addition, “Hollywood: Then & Now”, a one-man performance that blends comedy, music and celebrity impressions into a wholesome evening of family fun, has been featured as headline entertainment by Crystal Cruises, Holland America, Princess Cruises and numerous corporate engagements.

Mr. Lambert’s diverse musical talents have ranged from co-writing lyrics for the musical, IS THIS ANY WAY TO START A MARRIAGE?, to an appearance in EVERYTHING, a music video with Michael Buble, and starring in THE ENTERTAINER, a commercial by Joel and Ethan Coen. Mr. Lambert also appears as a dancing Hot Dog in a Pepsi commercial shown in local cinemas.

As a young theater student, Mr. Lambert won numerous drama awards sweeping Best Actor and Most Valuable Actor four years in a row, was awarded a Bank of America scholarship award, and appeared with the Young Americans appearing in domestic productions, and the New Kids Show in performances throughout Europe.

Posted by Perry Lambert at 12:12 AM No comments: